The Day That Hollywood Filmed The Best Doggy Daycare In Yorkshire!

Hello everyone, and welcome to another River Dogs dog blog! Now I know that some of you will already be craving your River Dogs Daycare fix, what with us being closed over the Easter period, but we’ve got a fantastic story that will leave you asking more questions than a toddler at a space exhibition. You might have noticed that we’ve made a lot of hints about our four-legged friends wanting to star in their own Tadcaster Doggy Day Care motion picture (they’re all superstars after all!). Well, when the call came from Dogwood Studios telling them that they wanted to film the Best Doggy Daycare In Yorkshire, we welcomed them into our daycare centre with open arms and all four paws waving!

The Day That Hollywood Came To The Best Doggy Daycare In Yorkshire! 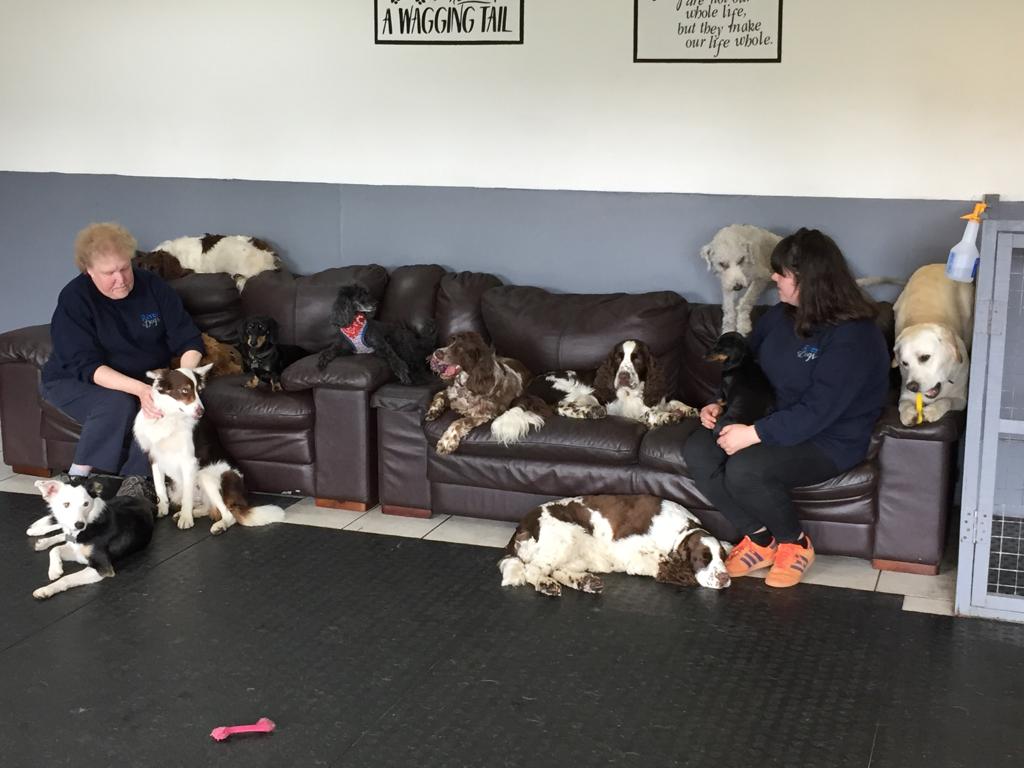 Picture the scene (that’s what they say in the movies, right?). We were sat drinking our coffee when the phone rang. After reluctantly putting down his HobNob, the Man in Shorts answered and the call and nearly fell off his seat. Hollywood was on the other end of the line, and they wanted to make an action-packed movie about the Best Doggy Daycare In Yorkshire. After pinching himself a few times and making sure that this wasn’t a belated April Fool’s prank, the Man in Shorts arranged a time that Dogwood Studios could come and film our Doggy Daycare Yorkshire business.

We spent hours thinking about possible names for the movie on the morning of their arrival. Captain Dogmerica, Dogception, Lord Of The Dogs, and A Street Car Named Stanley were the main contenders in a list that ended up being a mile long by the time that we had finished. But before we had any chance to settle on a name, the door opened, and the camera crew arrived. They each wore a laminate pass around their necks with the words ‘Best Doggy Daycare In Yorkshire’, and underneath, in our very own font, ‘River Dogs’.

A film about the Best Doggy Daycare In Yorkshire doesn’t come about without the furry friends that keep the business going. Everybody wanted to play their part in our first ever feature-length film, dramatising daycare for dogs and the benefits of home boarding for dogs in a way that would make the Harry Potter franchise seem like yesterday’s news. We’ve been told by Dogwood Studios that we can’t give too much of the game away (especially the ending where the Springer Squad have to save the Man in Shorts from a volcano that’s just about to erupt…oh…never mind), so we’re going to concentrate on two very special members of our Doggy Day Care Yorkshire team for you today. 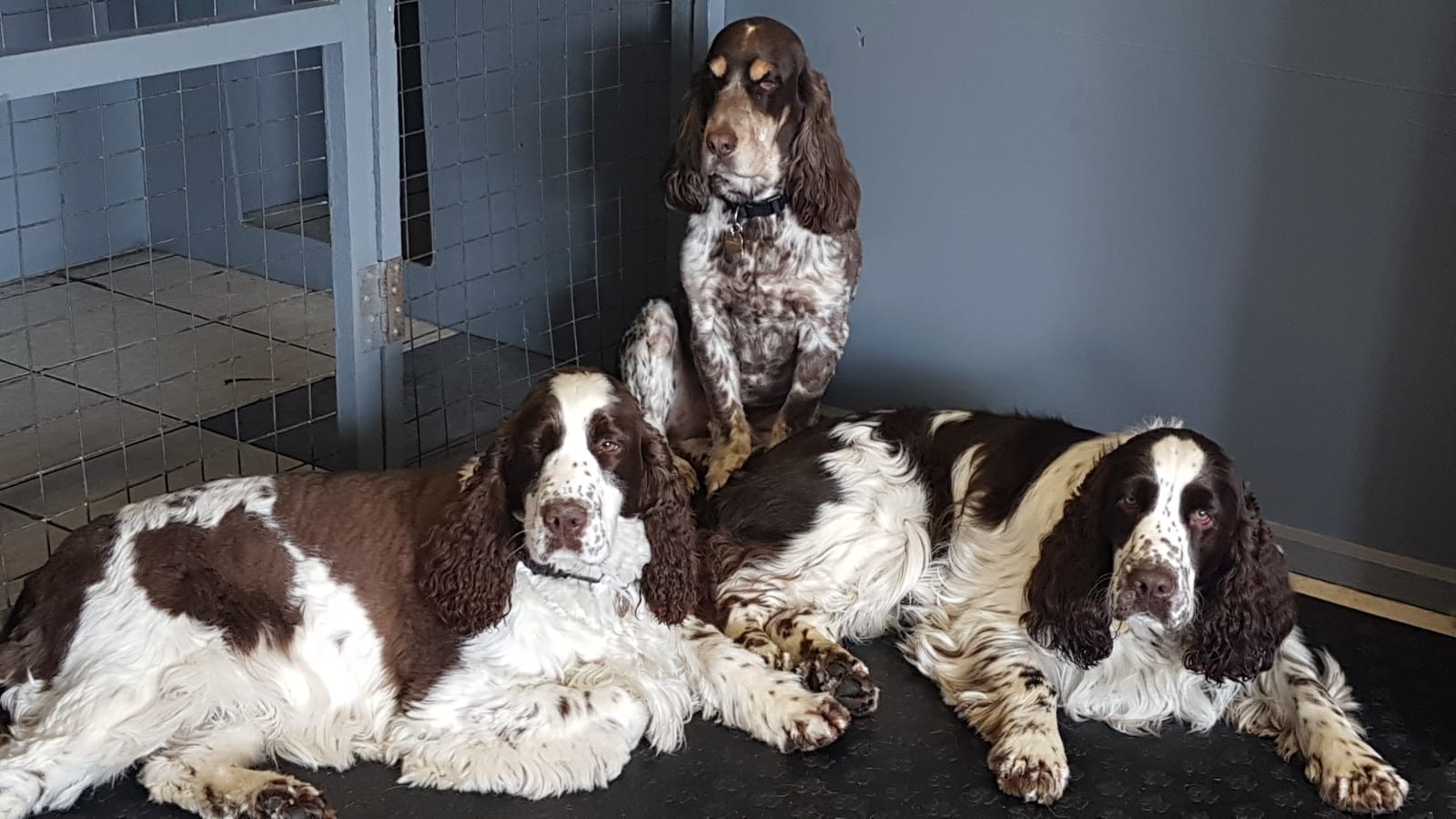 They say that a dog’s life can be tough, but once the film crew had spent a while pampering up two of our well-known faces, they certainly didn’t have any qualms about being on the camera and starring in their very first movie. Relaxing on the sofa, they relished their very first scene in what was now titled ‘Doggy Daycare Near Me – A Poochy Tail’. Ronda showed just how comfortable the River Dogs unit is and performed her monologue so well that Helen and The Man in Shorts both wept for around an hour. 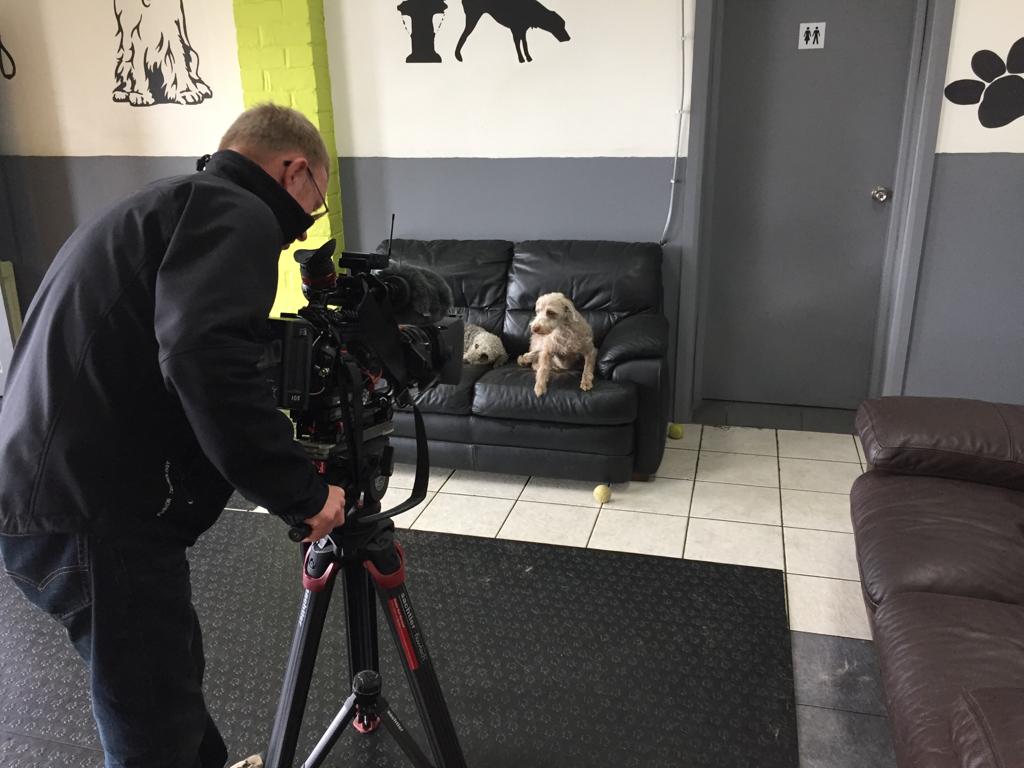 After finishing her lines and finally accepting that this was not a musical film, Nelly jumped down from the director’s couch and donned a bit of hi-tech camera equipment for some death-defying action shots. You can’t have a film about the River Dogs and the Best Doggy Daycare In Yorkshire without getting a shot of the river. After reading our blog about how to keep your dog safe this Spring, Nelly knew how to pull off some of the greatest walking stunts the world has ever seen while remaining safe at all times! She ran through the water as though she were floating on top of it, all the while catching some great images of the River Dogs at play. We can’t go into too much detail about this scene as we don’t want to ruin the part where Helen has to dive into the water to free a trapped Ollie from being captured by sea creatures…we’ve don’t it again, haven’t we? 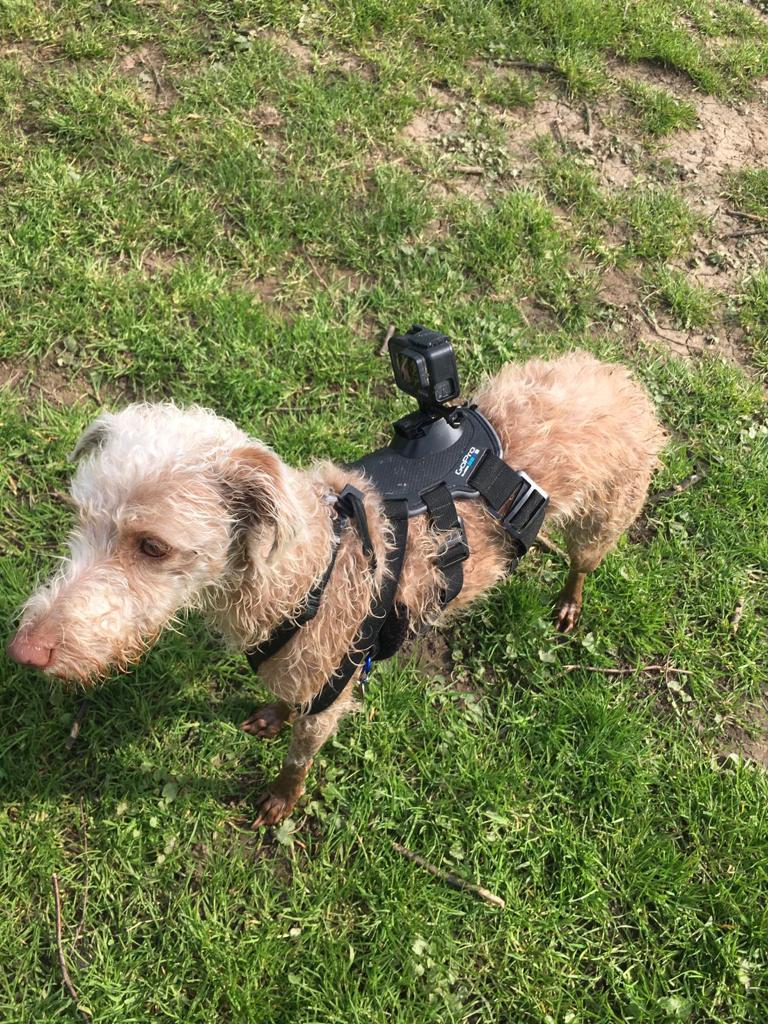 After a long day of filming at several stunning locations (most of which can be found in our Top Dog Walks In Tadcaster article!), it was time to head back to River Dogs HQ and enjoy a nice cup of tea and a round of Puppacino’s for our four-legged stars. Due to commitments in filming the new Star Wars movie, Dogwood Studios said that they had to leave and promised that they would be back to carry on filming the Best Doggy Daycare In Yorkshire next week. We said our goodbyes and set about getting ready for their return. While we weren’t supposed to take a look at the footage before the final edit of the film, we couldn’t help but take a sneaky-peek at our poochy-pals in action. Ronda looks as though she could be the next Scarlett Johansen, and Nelly has all of the makings of the next Kate Winslet. This is one movie that you’re going to want to enjoy on the big screen! 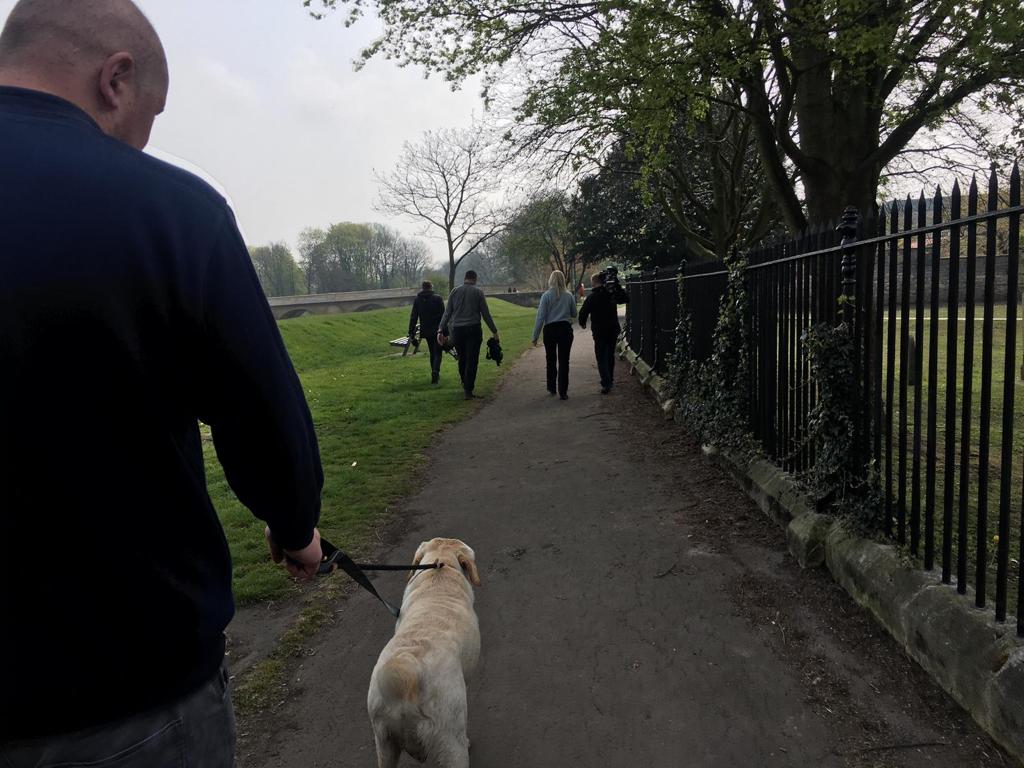 Thanks for checking out our latest River Dogs blog. Unfortunately, and while this might not come as a shock to you, we can’t really tell you about the top secret goings-on that have been happening here at River Dogs. What we can tell you is that all of the River Dogs had a great time and that more news will be coming your way as soon as we get the go ahead. Thank’s for reading, and we’ll see you next time!

Still hungry for more Doggy Day Care Tadcaster Blog action? Why not check out the River Dogs playing hide and seek around the Doggy Daycare Selby scene, or take a read of our article on Daycare For Dogs and why our furry customers voted us the Best Doggy Daycare In Yorkshire!

PLEASE NOTE – All River Dog’s dog based ‘Dog Blogs’ are fictitious and for entertainment purposes only. These blogs do not accurately represent River Dogs Doggy Daycare policies and are born from the imagination of our social media department. For more information about our policies, services and business values please visit our website. 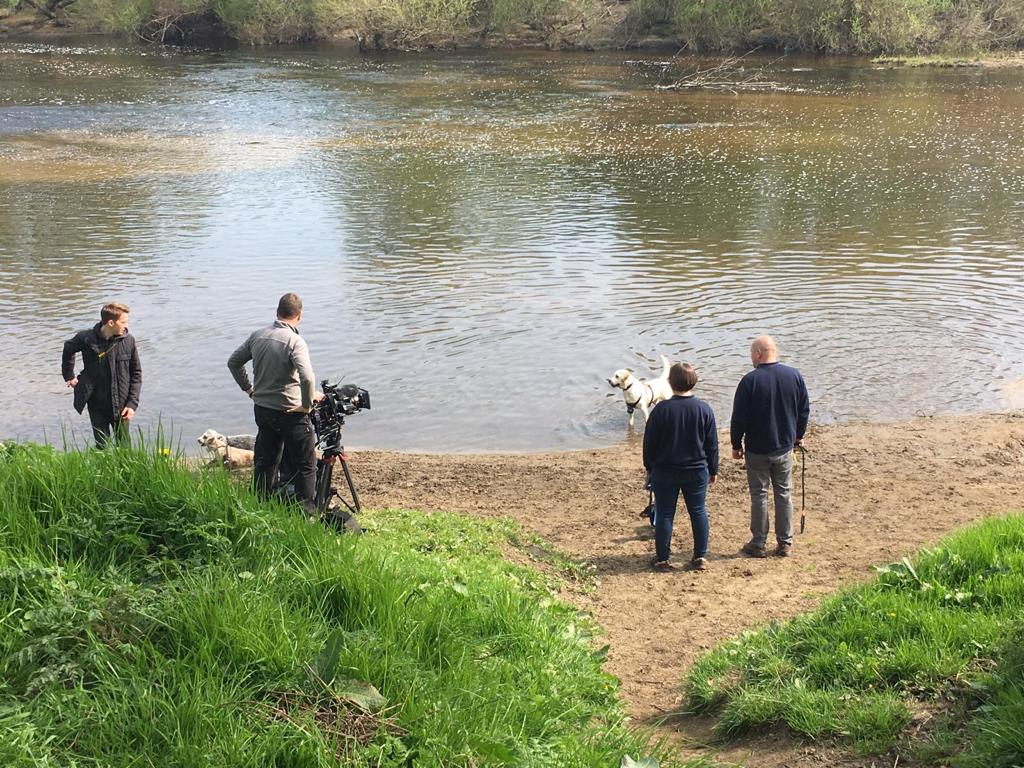